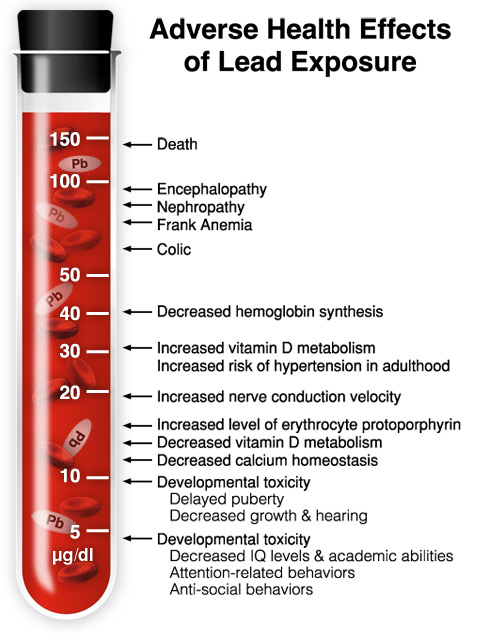 So how does lead enter our bodies? Once ingested, lead is absorbed in the gastrointestinal (GI) tract. After absorption, it binds to red blood cells and circulates in the blood. Some of this lead floats free in the plasma and can accumulate in tissues and bone; less often, lead is excreted in the urine. Over 70% of lead is stored in bone and can be mobilized (released) after a bone fracture or with the breakdown of bone caused by diseases such as osteoporosis. While adults absorb only about 5% of the lead they ingest, infants absorb as much as 50%.

Effects of Exposure
Lead is a neurotoxicant that can cause a number of adverse health effects, with the specific effect depending on the level of exposure (Figure 1).1 Overt lead poisoning, which is now rare and can cause death, usually occurs at blood lead levels in excess of 70 or 80 micrograms per decilitre (μg/dL). The symptoms of overt lead poisoning include headache, abdominal cramps, and encephalopathy (severe swelling of the brain). Lower blood lead levels are associated with other less acute symptoms and can have adverse effects on children’s growth, development, behaviour, and intellectual abilities.

In 1979, Herbert Needleman and his colleagues found that children with higher tooth lead concentrations were more likely to be described by teachers as impulsive and unable  to follow directions (Figure 2).2 In a follow-up study, they found that children with higher tooth lead levels had lower reading scores and lower class ranking. Children in the higher lead level group were over 5 times more likely to have a reading disability and 7 times more likely to drop out of school than children in the lower lead level group.3 In another prospective cohort study, childhood lead exposure was found to be a predictor of delinquent behaviours in adolescents.4

In yet another study, Kim Cecil and her colleagues in Cincinnati used magnetic resonance imaging to examine changes in brain structure from childhood lead exposure (Figure 3).5They found that higher blood lead concentrations during childhood were associated with significant decreases in gray matter volume in the brain, especially in the prefrontal cortex—the part of the brain that distinguishes us from other species and is responsible for executive function, which includes planning, impulse control, and delayed gratification. In this study, the males had greater gray matter volume loss than females, which is consistent with higher rates of attention deficit hyperactivity disorder (ADHD) and antisocial behaviours found among males.6 Children who have ADHD have been shown to have reduced brain volume in the prefrontal cortex when compared with children without ADHD.7 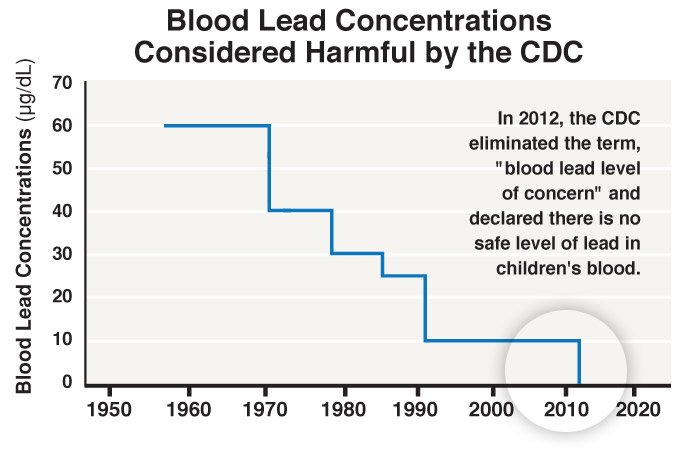 Prior to 1970, lead poisoning was defined as a blood level of 60 μg/dL or higher, a level associated with colic, anemia, encephalopathy, and death. Today the use of biomarkers—the measurement of environmental contaminants in blood, urine, or other body fluids—has revolutionized our ability to quantify and test the adverse health effects of low-level exposures to toxicants. As research has continued to demonstrate adverse health effects at increasingly lower blood lead levels, the US Centers for Disease Control and Prevention (CDC) has reduced the acceptable levels of blood lead (Figure 4). Considerable evidence now suggests that lead-associated intellectual deficits and behavioural problems occur at blood levels below 10 mg/dL.

What Biomarkers Show
Bruce Lanphear and his colleagues (2005) pooled data from seven prospective cohort studies that compared child performance on IQ tests and selected measures of blood lead concentration in children followed from infancy until 10 years of age.8 They found evidence of lead-related intellectual deficits among children who had blood lead levels below 10 μg/dL (Figure 5). 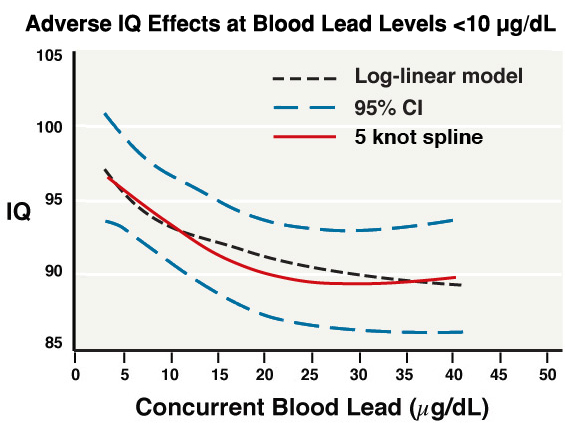 An increase in children’s lifetime mean blood lead level from less than 1 to 10 mg/dL was associated with a 6-point IQ deficit. Moreover, the lead-associated IQ decrement was greater for a given exposure below the 10 mg/dL guidance level.

2012 CDC Guidelines
This kind of evidence has led the CDC to conclude that there is no safe level of exposure. In 2012, they abolished the level of concern rating and recommended a reference value of 5 μg/dL to target children for source identification and environmental interventions. Canadian guidelines currently call for specific actions to reduce lead exposure for children who have a whole blood level of 10 μg/dL—a value that is now under review by Health Canada.

While children face the greatest risks from lead, new studies have found that low levels of exposure also harm adults. In Mexico City, blood lead levels of 5 mg/dL and higher were reported to be a risk factor for miscarriage.9 In the US, blood lead levels below 10 mg/dL were associated with an increased risk for high blood pressure and premature death from heart attacks and strokes.10

Search links between toxicants and human diseases or conditions.